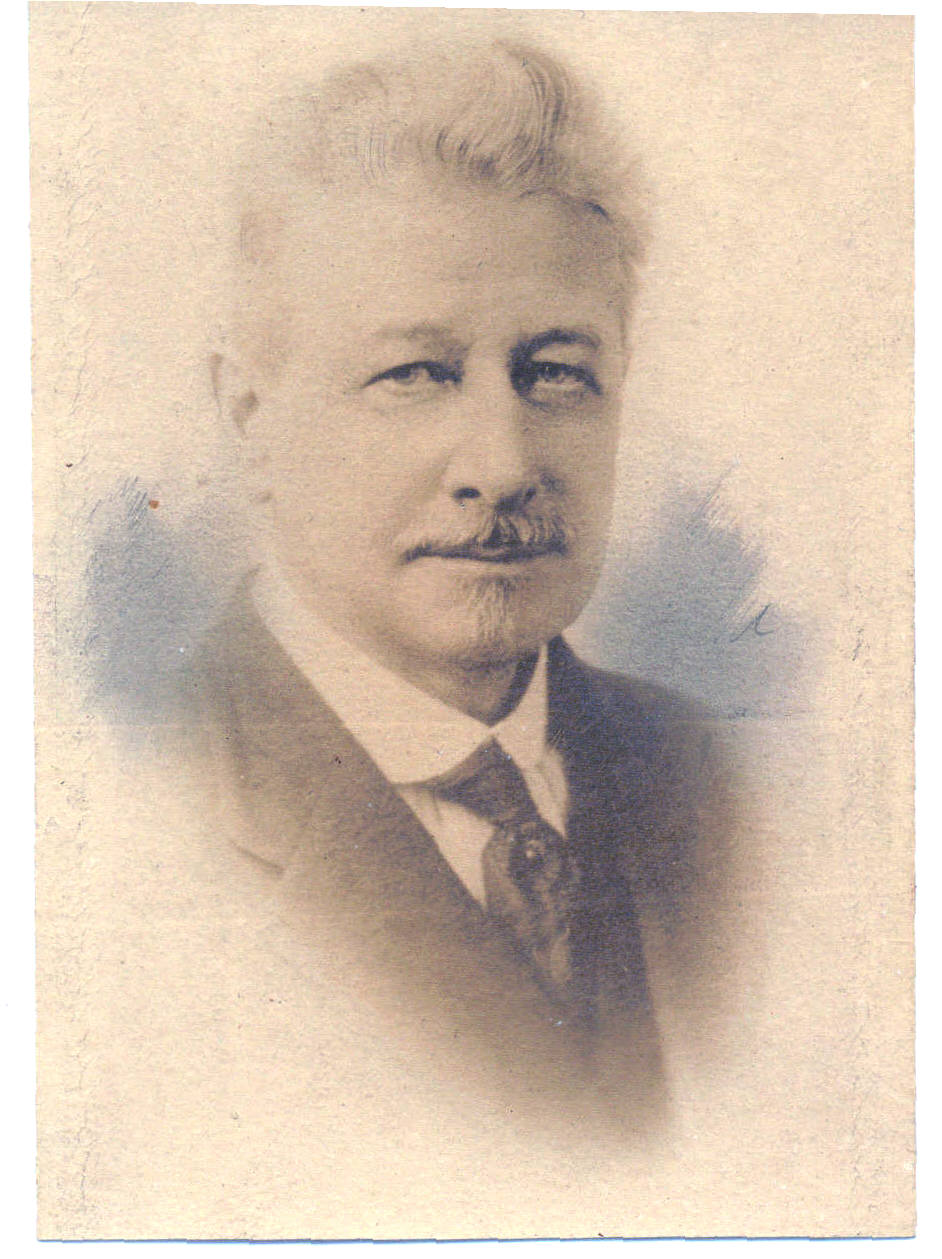 This site is a repository for the work of the American scientist Elmer R. Gates (1859-1923).  Quite famous in his day, Gates was a virtuoso inventor.  His better known inventions include the foam fire extinguisher, an improved electric iron, a climate-controlling air conditioner, and the educational toy Box and Blocks.  He was productive in the fields of X-ray, alloy casting, electrically operated looms, and magnetic separation devices for mining.  He devised instruments for developing muscular skill; he created indoor replications of weather systems; in the late 1800s he invented an electronic music synthesizer.  A 1904 Synopsis of his work listed thirty-five lines of inventive research in which results had been obtained.  At the beginning of the 20th century, the Elmer Gates Laboratory in Chevy Chase, MD, was the largest private, non-commercial laboratory in the United States.

Despite his extraordinary output as an inventor, Gates saw himself as a psychologist.  He pursued invention primarily to study the processes of the mind while it engaged in its best work.  Through years of recorded observations, he discovered psychotaxis, the integrated hierarchy of sensory discriminations required to create a valid and complete mental representation of a given part of the physical world.

Gates used psychotaxis to invent.  First, he would experience through each of his senses every piece of sensory data that the subject at hand could impart, letting his mind classify each datum naturally according to its perceived likeness to or difference from the other data.  Having thus acquired and categorized all the subjects sensations, he would then, in psycho-taxonomic order, recreate each sensation in his mindmoving through the series over and over until he could execute it at great speed.  This might take several weeks.  Finally, he would work his way through the psycho-taxonomic hierarchy of sensory associationswhich associations gave rise to images, concepts, ideas, and thoughts.  Repeated recollection of the psycho-taxonomic hierarchy increased the blood flow to the areas of the brain where its data were enregistered and processed.  This refunctioning brought into dominance those neurological structures through which subconscious connections were made.  The result was new insights into the subject.

He discovered and used other aids to invention, all experimentally validatedquiescence, periodicity, climate control (he invented an air-regulated isolation chamber), anabolic emotional states (he researched their chemistry and physiological effects), and linguistic mentation.

Gates hypothesized that unusual mental activity produced unusual structural or chemical differences in the brain.  To test his hypothesis, he conducted many experiments on guinea pigs, rabbits, and dogssometimes using electric shock as a negative reinforcer (reportedly the first person to do so).

His experiments required test animals to make extraordinarily refined discriminations with some one sense in order to carry out successful adaptive responses to their environment.  Upon completion of the experimental training (which often lasted for months), the test animals and one or more control groups of like animals were chloroformed.  The groups were compared by a histological examination of the brain areas where the sensory data were enregistered.  (To facilitate the examination, Gates invented a staining technique wherein electric current passed the stain through neurons in two different directions.  He also made major improvements in the microscopes magnification.)  As he suspected, the neuronal structure was always more highly developed in the test group.  His conclusion was that rigorous training of the senses gives more brain structure and, therefore, more mind with which to create.

Believing that scientific method is mental method, Gates devoted his life to the study of the Art of Mind-Using psychurgy, as he named it.   He had no sympathy for theory and speculation, and would state no more than he could prove true if given the opportunity.  Unfortunately, because of the unusual nature of some of his researches, they attracted a fringe element.  Studies were often misinterpreted in the popular press, and quotes were fabricated.  He was said to have seen the shadow of the departing soul of a dying rat, to have found that the color of sin is pink, to have gotten ideas for his inventions by telepathy from the minds of other inventors.  His efforts to stamp out these false reports were unsuccessful; some live on in the self-help and new age sections of todays bookstores.

To set the record straight, this site contains most of the extant works of Elmer Gates: patents, lectures, papers, and books.  It presents reliable firsthand accounts by others and several biographical referencesincluding the authoritative 1971 biography, Elmer Gates and the Art of Mind-Using, written by his son Donald Edson Gates.  There are also photos of Elmer Gates, his family, his laboratories, and his inventions.  Other supplementary information is included.

This site was created and organized by Lee Humphries, www.ThinkingApplied.com, for public benefit.  It was prepared with the generous cooperation of Elmer Gatess granddaughter, Dr. Mary P. Gardner, and her children, who made available documents from the estates of Elmer R. Gates and Donald Edson Gates.  Reproduction of copyrighted site material for commercial purposes is prohibited. Please direct comments and inquiries to this email address.

On January 23, 2008, the papers of Elmer Gates were acquired by the Archives Center, National Museum of American History, Smithsonian Institution, Washington D.C., for its Lemelson Center for the Study of Invention and Innovation. They are catalogued as Collection AC1123.

Visits to the Elmer Gates Laboratory

The Inventions and Patents of Elmer Gates

An Overview of Elmer Gates's Philosophy

Elmer Gates—In His Own Words (Selected, arranged, and edited by Lee Humphries)

Articles and Lectures by Elmer Gates

The Science of Mentation Gates's experimental game plan for his psychological researches, (1895)

Methods of Research and Importance of Cellular Psychology (1895)

The New Microscopy and Experimental Therapeutics (1897)

The Art of Rearing ChildrenMore than its title suggests, this article summarizes some of Gatess studies in brain building, the transmission of acquired characteristics, and the chemistry of human emotions. (1897)

Psychology, Psychurgy, and the KindergartenSensory discrimination experiments with 12 shepherd puppies, with amoebas, with 6 dogs, with 4 two-year-old dogs of like breed, with Guinea pigs.  A method for building the minds of children (1897).

Brain Building and Mind Building, with Special Reference to the Sense-Training of the Eye and Ear, and Teaching Mentally Defective ChildrenAuditory and visual discrimination experiments, pedagogical method, electric sonometer, control of overtones. (1898)

Electrographs of the Electro-static Current Made Without a Camera—The tracings of electric current on a photographic plate; the process involved. (1899)

Electrographs (Electricity) The tracings of electric current on a photographic plate, made without a camera; the process involved. (1899)

Electrographs (American Inventor)The tracings of electric current on a photographic plate, made without a camera; the process involved. (1900)

Can Will-Power Be Trained?—Learning to discriminate and execute muscular motions of minute energy difference; increasing the speed and vividness of sequential mental images. (1900)

We Can Increase Our Mental Power—Intellective and emotive elements as the basis of choice. (1900)

Immortality from New Standpoints—Gates's view of consciousness; the scientific requirements for a proof of immortality (1902)

Physiologic Effects of the EmotionsGates's studies of the chemistry of emotions. The essay refutes the bogus claims of the newspaper article, "Prof. Gates Reads Thoughts by His Wonder Bottle," which is appended at the end. (1903)

The Color Theory of Prof. GatesA letter to the editor reporting studies on color, emotion, and fatigue. (1903?)

Life a Property of Matter; The Education of Brain CellsPsychotaxis; animal experiments demonstrating the connection between brain-building and the functioning of internal organs; human case study of dyspepsia; human case study of visual improvement in color discrimination. (1904)

Sure Cure for the BluesA popularized, but informative, article on the chemistry and physiology of human emotions and on the concept and application of dirigation. (1905)

On the Transparency of the Animal Body to Electric and Light WavesThe correlation between electric waves and muscular and mental activity; their use in measuring subjective mental states; the deviation from a baseline standard as a tool for medical diagnosis. (1906)

A report on a Gates lecture at the Smithsonian Institution in the New York Medical Times. The chemistry of emotions and experiments in mind-building. (1894)

"Psychology and the Mind Art" in the Philadelphia Press. A report on Gates's lecture to the Educational Club of Philadelphia. (1895)

"X Rays on the Stars" in The Washington Post. A report on the "absolute" vacuum, shadowgraphs from non-luminous rays, photographs of planets, brain studies. (1896)

A report on the absolute vacuum in Homeopathic World. (1897)

A report on the Air Cooling Apparatus in the New York Sun. (1897)

"The Telemicroscope" in the Christian Observer (1898)

"Marvels of Science" by Rene Bache. A report on the music synthesizer. (1899)

"This Machine May Largely Increase Worlds Gold Output" in the New York Herald. (1900)

"The Art of Mind-Using" by Emily Lee Sherwood. The relationship between successful mentation and bodily and environmental conditions. (date unknown)

"The Training of the Senses" by Theodore Dreiser, unpublished manuscript (date unknown)

"Making Rain by Electricity" by Clifford Howard in Everybody's Magazine (1901)

"Regulating the Weather" in The Times-Democrat. (1901)

A report on the Double-Microscope in Logos Magazine. (1902)

"Extracting Perfume from Flowers by Electricity" in The Mail and Express Saturday Illustrated Magazine. (1903)

How People Learn—Chapter 5. "Mind and Brain." Committee on Developments in the Science of Learning, Commission on Behavioral and Social Sciences and Education, National Research Council.

Color and Acuity Difference between Dogs and Humans by Jennifer Davis